What a long story we might begin here. So many worthy buildings; so many points of view. Curbed Atlanta, an interesting and energetic online magazine of Atlanta real estate, calls no fewer than 16 buildings iconic, without even breathing hard. Five years ago, Georgia Globe Design News profiled the 50 top buildings of the previous 50 years based on architectural significance alone. So which Atlanta buildings might we call the most iconic? And why?

Let’s take a view that’s characteristic of Atlanta’s personality. Let’s look at buildings that are distinguished not just by how they look, but by what they do, and by the part they play in the progress of this great city. 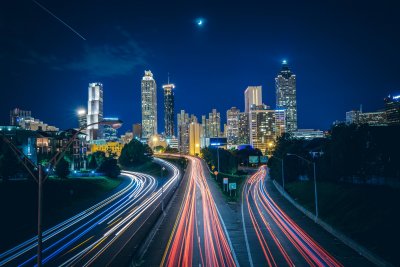 Part of Our Original Spirit of Enterprise

For almost 150 years, the Georgia Freight Depot has been pivotal in the coming and going of commerce. Originally a broad-shouldered, secure shelter for receiving and shipping goods, the main freight depot for the Georgia Railroad, the building originally saw timber, cotton, and iron going out, and clothing, furnishings, and manufactured goods coming in. The Depot proved to be as adaptable as the role Atlanta played in first rebuilding and then redefining the South, with the nature of the value we exchange here growing and evolving over time.

Masterfully restored and maintained, today the Georgia Freight Depot still houses the exchange of value, but in an increasingly knowledge-based economy that exchange is in ideas and human engagement. One of Atlanta’s most prolific event venues, the Depot hosts and houses gatherings ranging from corporate events to weddings, from concerts to engineering conferences. As adaptable and accommodating as ever, the Depot solidly represents a kind of cornerstone of Atlanta’s dedication to enterprise.

Well, strictly speaking, the inspiration for the Millennium Gate was the Arch of Titus in ancient Rome. But what most of us thought of, when we first saw it, was that hub of the Champs-Élysées in Paris, the Arc de Triomphe. Atop the Millennium gate there’s a penthouse, too, and it looks to some like the Parthenon in Athens. Since you’d have to be a bird to see the penthouse from most approaches, this odd-sounding idea doesn’t seem to clash at all.

Some spirited discussion attended the opening of the Millennium Gate 10 years ago. When it opened officially on July 4, 2008, the emphatic classical references of the architecture were decidedly in contrast with the forward-looking thrust of Atlanta new construction. The wisdom of these classical references has grown on us, though. We see now that the Millennium Gate’s statement includes the fact that Atlanta has worked its way into the company of the world’s great cities.

Embodying the Energy of Today

For a modern icon, Atlanta presents a perplexing wealth of perfect candidates. The Equitable Building, for example, is a match for anything in the mid-century design revolution that moved away from the decorative. The Equitable is every bit a match for New York City’s Seagrams Building, or any of its neighbors on midtown Park Avenue for that matter, in that the structure itself is the design.

The High Museum is modern in a different sense. As we approach the main entrance, the High seems to enfold a kind of starship, poised to transport us to different dimensions.

Not only are the iconic examples of Atlanta’s energy too numerous to crown, but the designers and architects who keep on embodying that energy in Atlanta new construction are abundant too. There is a channel here for every kind of imagination, as long as it is dynamic.

No matter which examples we choose, or how many, for the iconic buildings of Atlanta, we can be certain the list will continue to grow. As the Atlanta leader in the sale of residential real estate and new developments, Engel & Völkers would be happy to discuss the influence of existing icons on the value of Atlanta condos, homes and new construction, as well as the impact of the icons to come.