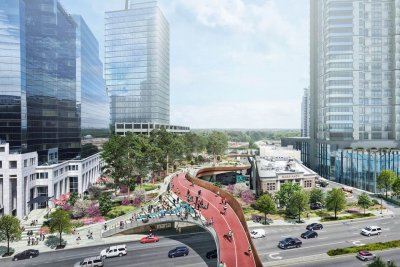 Chick-fil-A’s CEO, Dan Cathy, has been in talks with business and government officials in Midtown over the idea to cover a piece of Interstate 75/85 with green space near The Varsity.

However, the idea to build parks atop transportation infrastructure isn’t anything new.

A practicability study by Central Atlanta Progress is underway to determine if The Stitch—a highway-capping project that would link downtown and Midtown by covering the interstate with green space and private development—could really happen.

With these dreams and ideas floating around for Atlanta’s green landscape, it is hard to say which dream project may become a reality. Stay tuned for more information as this project progresses.