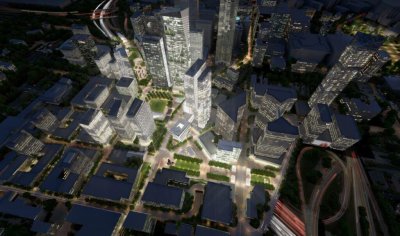 As Atlanta’s population continues to grow and new developments pop up around downtown, three groups are proposing to reimagine Atlanta’s crowded interstates with a new trend for urban cities; deck parks. Deck parks are green spaces built over highly congested highways. According to the Washington Street Journal (WSJ), around 30 cities across the U.S. have suggested deck park developments, and as city dwellers continually express their interests for more green park spaces, it comes as no surprise that Atlanta is capitalizing on this rising trend.

Similar to the Clyde Warren Park in Dallas, Texas and the Atlanta Beltline, these three proposals plan to create a refuge from the city and provide spaces to facilitate relaxation and physical activity. One proposal dubbed “The Stitch” by the Central Atlanta Progress (CAP), a nonprofit community development organization, proposes to develop a 14-acre park plan that will span I-75 and I-85 downtown connector from the Civic Center to Piedmont Avenue.

This deck park will open up underused land to development and also provide a space for recreational special programming for Emory University and the Georgia Power headquarters. CAP also envisions this deck park to be a mixed-use residential space that will host retail, restaurants and medical buildings.

In addition to “The Stitch,” a 9-acre deck park covering Georgia Route 400 is under consideration by the Buckhead Community Improvement District (BCID). This deck park will connect the Atlanta Financial Center to the Buckhead Loop, including Buckhead Marta Station

Chick-fil-A CEO, Dan Cathy, is also considering building a deck park along North Avenue at the I-85 and I-75 interchange to better connect Georgia Tech with Midtown Atlanta. Further details for this project have not been released.

As living and working in Atlanta’s urban core becomes more popular, the push for more urban green spaces increases, not only because their attractiveness draws more young people into the city, but also because they lure in tech companies that are looking to expand their presence outside of Silicon Valley in a dynamic urban center. Developing deck parks will not only reinvigorate our city but will also boost real estate values by increasing commercial and residential development.

If you’re interested in discussing how these new developments might affect your home’s value contact us for a complimentary market analysis. If you’re searching for the perfect home near one of Atlanta’s renowned parks, our seasoned real estate advisors can help.

Engel Völkers Atlanta is the market leader in the sale of residential real estate and new developments, and our seasoned professionals would be more than happy to discuss your real estate goals with you. Just call us at 404.845.7724 or find out more at www.evatlanta.com.