Stories of the Changing Atlanta Skyline

A 3.5-acre block of Midtown Atlanta is taking to the sky right now — Selig Development’s $533 million mixed-use venture, 1105 West Peachtree. This mixed-use development comprised of a 31-story office tower, the 40 West 12th residences, and the Epicurean Atlanta hotel, all connected by a ninth level Sky Plaza, is once again transforming Atlanta’s skyline. Construction is planned for completion in the third quarter of 2021, and it’s already easy to feel the excitement this visionary project is

generating with the Sky Plaza amenity deck recently topped out.

Responding to Atlanta’s thirst for mixed-use design, where live-work-play lifestyles beckon a new generation of experiences that connect them to the vibrant neighborhood surrounding, Selig’s Midtown development will offer a boutique collection of luxury condos, exclusive to the community, yet seamlessly connected to an array of unprecedented recreational opportunities, specially curated dining destinations, and a best-in-class, highly amenitized place to do business. The idea that dwellers can begin and end their days in a fully-immersive, mixed-use environment with as much or as little exposure to the energetic city below, all the while having the option to retreat to their oasis in the sky, ultimately speaks to the unprecedented offerings soon-to-be delivered at the corner of 12th and West Peachtree Street. 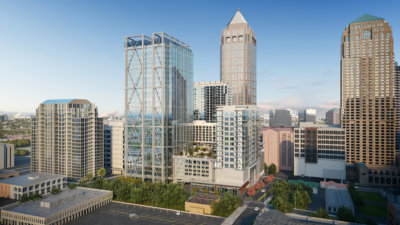 Neighboring the residences, the 178-key Epicurean Atlanta, a Marriott Autograph Collection Hotel, was announced for the site last October, and one of Atlanta’s largest law firms – Smith, Gambrell & Russell – has secured five floors at 1105 West Peachtree for its new offices. That’s not all. An additional five floors have been locked in by tech giant Google for its southeastern headquarters.

Behind the Towering Influence

For more than 100 years, Selig Enterprises has done much to compose the Atlanta skyline and keep it ever-changing. With more than 15 million square feet of residential, retail, industrial, office, and mixed-use property in its current portfolio (and untold millions more developed in the company’s century-long history), Selig Enterprises traces its success through four generations of family vision and stewardship.

The story of Selig Enterprises’ origin could be a prototype for the American Dream, and it all unfolded right here in Atlanta. Ben Massell, grandfather of the current CEO, Steve Selig, came to the U.S. in 1888 from Lithuania. As a teenager, Massell dropped out of high school and began working to help provide for his family. Saving the money he earned, Massell purchased his first downtown Atlanta property and constructed a building. He leased the building and sold the property, doubling his investment, before the construction was complete. This began a story that parallels the progress of Atlanta itself, under the banner of Massell Properties. Massell’s daughter, Caroline, married successful Atlanta businessman Simon “Slick” Selig, Jr. In 1968, Slick sold his family business, Selig Chemical Company, to oversee his wife’s portion of her family’s real estate business. Later that year, Selig Enterprises was formed while Massell Properties was owned by Caroline’s brother Ben Massell, Jr.

Still at the Forefront Today

Plaza Midtown, the District at Howell Mill, the award-winning, multi-block megaproject 12th & Midtown; and The Standard in Technology Square are just a few examples of Midtown developments that Selig Enterprises is responsible for developing in Atlanta. With 1105 West Peachtree and 40 West 12th standing as Selig’s next and greatest mixed-use destination in Midtown, we gladly bring the City, The Next Generation of Midtown.