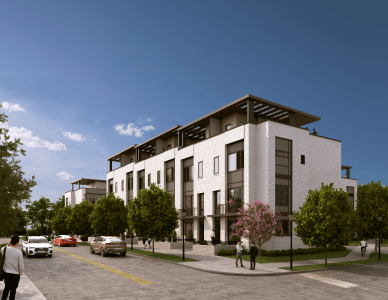 Atlanta’s cityscape has undergone a major makeover over the past decade, and the majority of these changes came (or are coming) to Midtown, such as 1065 Midtown, One Museum Place, and Atlantic Station’s newest, District Lofts. The latest of them all, 550 North Highland, has recently begun sales to deliver 16 townhomes priced in the high $700’s and mid $800’s, located in the coveted Poncey-Highland neighborhood, bringing luxe living to one of Atlanta’s hippest places to live.

Poncey-Highland is one of the most vibrant and welcoming neighborhoods in Atlanta, sitting just a few miles northeast of Downtown. The name originated from its proximity to the intersection of North Highland and Ponce de Leon avenues in the 1970s. Cozily nestled between Virginia Highland, Old Fourth Ward, Inman Park, and Candler Park, you can easily say Poncey-Highland is the center of it all. Between the early 1900s to the late 1930s, the neighborhood was comprised with a collection of residential and commercial areas, with an industrial corridor that was developed between the mid-1920s and 1950s. Now, a lot of those industrial buildings have been refurbished to fit the community’s ever-changing needs, like the Ford Factory or the Telephone Factory which have both been converted to modern-living lofts.

The neighborhood offers the urban lifestyle people crave without being in the middle of Atlanta’s bustling downtown scene. “550 North Highland puts buyers in the heart of the action,” says Christa Huffstickler, Founder & CEO of Engel & Völkers Atlanta, “Near highlights such as Ponce City Market, The Atlanta Beltline, Freedom Park, and a multitude of shopping and dining experiences.” Plus, the community is very active and tight-knit. You can always find folks jogging the Beltline trails, day and night, and there is a year-round farmers market at Freedom Park every Saturday booming with organic and sustainable produce.

Poncey-Highland itself has been seeing changes aside from 550 North Highland with an influx of businesses coming to the area, such as the opening of the 65,000 square foot Beltline Kroger located at 725 Ponce in 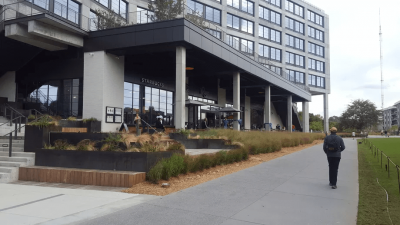 October of last year, or Ruby Chow’s, a new fine-dining Asian fusion restaurant, bar and lounge that opened its doors a little under a month ago. And, there are also plans to realign Williams Mill Road, making right turns easier for drivers turning unto North Highland and creating space for a large patio area at Manuel’s Tavern, which located right across from the 550 N Highland townhomes. This is amongst what Poncey-Highland already has to offer making it highly sought after, and with a vast selection of homes from single-family to industrial lofts, there’s something for everyone’s taste when moving to the neighborhood.

We are proud to be a part of the city’s growth and with our latest development in the works, we are excited about the future to come. If you would like to know more about the projects or looking to relocate soon, contact us! We have many knowledgeable Advisors waiting to assist you with your buying or selling needs.