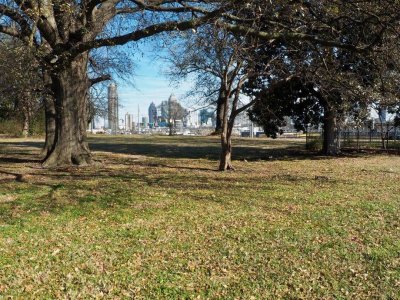 West Midtown is gearing up for an insertion of green space.

Construction began this month for a four and a half acre public park at the corner of Northside Drive and 17th Street, between Howell Mill Road and Atlantic Station.

The park will offer mulch trails, benches, and skyline views described as “dramatic,” according to officials with the Upper Westside Improvement District, a Community Improvement District (CID). The clean-up phase is expected to be completed by the end of September when the park would be opened to the public. Other phases will take several more months.

“We’re thrilled to be underway creating a safe and beautiful space along one of the highest profile corridors on the Westside,” said Elizabeth Hollister, UWID executive director, in a press release. An online survey of the planned park yielded over 650 responses suggesting that patrons would favor simple open space and walking/jogging paths over an outdoor gym.

To learn more about this project, please visit https://atlanta.curbed.com/2018/9/10/17842540/park-near-atlantic-station-set-to-launch-this-month